​Trauma is something that every person experiences at some point in their lives. However, experiencing trauma does not mean that we need to become or remain traumatized. They body has a natural, innate mechanism to help us heal from trauma and to process the experience. Once we learn how to effectively utilize the mechanism our body has, we can find healing and relief from these painful experiences.

Today I want to talk to you about what trauma actually is, how you know if you have been traumatized, what that looks like in your life, and most importantly, how you can start healing from those traumatic experiences.

When I first mention the word "trauma," what comes to mind? For most people, it's things like being abused or attacked, having been to war, or even being a refugee.

Most people also automatically think of PTSD, or post-traumatic stress disorder. PTSD is defined as a mental health problem. Unfortunately, this definition is very narrow and misses the fact that trauma occurs not just in the mind, but in the body as well. (Peter Levine, PhD, the man you'll see if you clink on the previous link, is a pioneer on trauma and healing from trauma, and much of this post is from his work.)​

​When we experience a traumatic event, there are strong emotions that are triggered in the body. These emotions are: fear (more possibly terror), profound helplessness, and panic. Trauma, then, can be defined as any event that triggers these feelings in you.

What makes an experience traumatic is our perception of the event in the long-term, and how we process those feelings that arise from the initial trauma.

If you experience a traumatic event but process the emotions and energy ok, then you are able to return to your normal way of living and remain healthy.

If, however, you experience a traumatic event but aren't able to process the emotions and energy ok, then you become traumatized. This results in longer-term difficulties that can effect us mentally, emotionally and physically.​

​​What trauma does to your body

​What happens to your body when you experience a traumatic event? This may ​not seem important, but it's actually central to knowing how to treat the trauma and to understanding why you might be feeling the way you do.

Let's say you're walking down the street, and somebody comes out to attack you and to take your purse or your wallet. You're going to immediately go on high alert and experience these emotions mentioned earlier - fear (terror), helplessness, and panic.

​When we experience trauma, the fight or flight system is activated. ​This mechanism puts your whole ​system on high alert and heightened arousal. This heightened arousal is the fight or flight state. During this stage, you have a whole bunch of changes that happen physiologically in your body. And all of these changes are designed to help you get out of that situation without having to think about what to do.

One of two things is designed to happen. Number one, you fight or number two, the flight, you run away. So you quickly assess the situation. You decide either, to fight - "I can take this person, so I'm going to take them down," because you're being threatened. And so now you're going to protect yourself. So you go into fight mode.

Or number two, the flight - you realize this guy is way too big for you, and you're not going to win. The next option is to get the heck out of here.

That process of either staying to fight or of running away utilizes all that extra energy that your body has just thrown into your systems to help you deal with this experience. ​Trauma can also lead to a 'freeze' response

Now, there is a third phase of this 'fight or flight' mechanism that is incredibly important. This third response is very common.​​ And that is called the freeze ​response.

​Imagine what happens when you're driving along the road, and there's a deer in front of you. What happens? You've got the deer in the headlights. The deer freezes, and they just stare at you. ​

There is also the phrase that we use of being scared stiff. If we can't fight or we can't run away, because we're in some sort of situation where we are physically restrained or overpowered, the response is to freeze.

You can also think of animals that play dead. This is the freeze response. They stop because the fighting isn't working, and they can't run away. So the next option is to freeze.

​Once we understand these phases, then we can utilize them to have healing from the trauma that maybe we have not processed. Or, we can see how they're still playing out, perhaps on a smaller scale, in our day-to-day lives.

​Remember, it's not just the traumatic experience itself, that's a problem with our long-term health and well-being. The problem is when we ​either can't or aren't allowed to process that strong terror, the panic or the helplessness and then it becomes a state of being for us, that's when we become traumatized instead of just experiencing the trauma. So you may have experienced the fight part, the flight part or the freeze stage of a traumatic experience.

How do you know if you've been traumatized or if you are currently traumatized?

There are two primary signs that can tell you if you've got trauma that needs healing:

This isn't meant to be an oversimplification, although it sounds that way at first. Let's look a bit more at each of these two items.

​Trauma from past experiences

​Some experiences are clearly traumatic. The experience of abuse, war, and being a refugee from a war-torn or high-conflict area are pretty clear. But even one experience of something traumatic can cause the same state. A severe car accident, one incident from a fight or attack, even receiving news that is devastating can all lead to being traumatized.

Trauma ​seen in your current health

​It might not be so clear from your past that you've got past trauma that needs healing. Any experiences where we've gotten into fight or flight mode, even when it happens repeatedly and doesn't seem that severe, can leave us trapped in that mode. When this happens, we're always on guard and feeling attacked and like we need to defend ourselves.

​Growing up with overly critical parents or siblings can leave you traumatized, for example.

​If you're in an ongoing state of stress because you haven't healed from past trauma, you might be dealing with physical issues like:

​Let's say we've got a cat and the cat is playing with a mouse. And he's chasing the mouse around. The mouse is now in fight or flight. He's trying to run away and he gets caught. And the cat plays with him for a little bit. The mouse tries to run away again and he gets caught. At some point, he's just going to freeze and hope the cat's going to leave him alone. He's realizing he can't fight the cat, and he can't get away either. So the mouse goes into freeze mode and pretends he's dead. This might save him, because the cat gets bored and it's not fun for him to chase him anymore. So the cat just walks away.

​What happens? The mouse comes out of his freeze state, and he runs like crazy, and he shakes and he trembles ​and he dissipates all that energy that's been there from that fight or flight, that high arousal state, and it brings the system down, and now he's back at normal. And now he doesn't walk around all day, feeling anxious and fearful that a cat's going to come get him. He's not constantly on high alert, because he's dissipated all of that energy.

This is similar to what can happen to us as well, except that we don't dissipate that energy and complete the cycle to come back down to a calm, relaxed state of being.

​We are traumatized, then, because we are constantly on high alert. I'll give you an example.

Let's say you grew up in a household where your father was an alcoholic, and he was not physically or sexually abusive, but he was verbally abusive. And you never knew when you came home from school, or when dad came home from work at night, if he was going to stop by the bars first, or if he was just going to come home. So you come home, and you have no idea if dad's going to be sober, or if dad's going to be drunk. And you know that if dad's been drinking, it's a bad night in the household, because he's going to start yelling and screaming, and maybe throwing things.

So every single time you come home from school, you're not normal, calm, peaceful, happy, you're on high alert. And when you're on high alert, you're in that fight or flight mode, you're tense, you're tight, you're anxious, you're fearful. And you feel helpless, because there's not a darn thing you can do to stop dad from drinking. So not now you have the traumatic experience of dad coming home and being verbally abusive, but you also are traumatized because it's a constant state of living.

Now, the hope part comes in, and the opportunity for healing comes in, when we realize that our bodies innately and naturally knows how to deal with these emotions.

​This trauma is something that is actually encased and embodied within your physical body. ​​The changes the physiology and the emotions become trapped, a way of being, when triggered.

​What we need to learn how to do and what we need to embrace to heal from this trauma is not to talk about the event, to relive the event, or to go through it in some way. That is more likely going to re-traumatize us instead of allowing us to heal from it. We have already been through the trauma, we don't need to re-experience it.

​Again, the heightened arousal is the state that we need to come down from. And that state is contained within the body. ​What we need to do is learn how to get comfortable with allowing the strong feelings and the physical sensations to come forth, and to be expressed in some way out through our body physically, so that we can have healing from the traumatic event.

​Your body knows how to process and heal from these traumatic events, even years after you have experienced them. The trick is tuning into those feelings and those physical sensations and doing them in a setting where you feel safe doing so, and allowing those things to come up and to be expressed through your body. We will talk more about that in another video and at another time.

You don't have to have experienced an abusive childhood or gone to war to be traumatized, but start to look at these feelings and allow yourself to just let them surface when they want to. And you can start the healing process of dispatching all that energy from your body so you can live a more happier, more joyful existence.

​​​​​Recognizing how you've experienced trauma and finding healing from it

​Can you see ways you've experienced trauma in your own life, perhaps in seemingly subtle ways, and how this is impacting your day to day life? 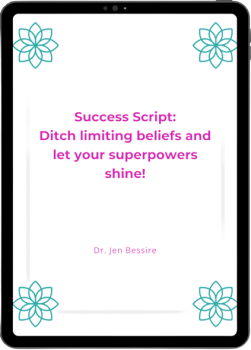 Success is 95% mindset. Get my FREE Success Script gift and create the beliefs that make success easy!